It is still hard for me to believe I have my own garden and have been able to grow fresh herbs, veggies and fruit successfully!  Who knew it could be this easy?   I was inspired to create this dish using things found in my own front yard.  Yep.  All from my garden I started a few months back.  (You can read all about that journey here).

I belong to many Facebook groups and earlier this morning someone posted a Zucchini Linguine recipe in one of them.  It looked so awesome and sounded so easy to make, I thought, "Shoot, I have most of these ingredients right outside in my garden!"

This was the recipe that inspired mine.  Granted, I made a few substitutions along the way and my pictures in no way look as good as this:


My version still turned out super yummy.  Here is how I made it...

I started by peeling my zucchini and cutting the smaller end off.  I wanted my "noodles" to be similar in size and shape in order to cook evenly.  (Next time I will leave the peeling on - I think it would make for a firmer "pasta").


I used the shorter piece I had cut off to "practice" my technique.  I think my mini noodles turned out pretty well.


Then, I sliced the larger piece into what resembled the approximate size of fettuccine noodles.  At this point, I realized I needed a way bigger knife, but it worked out in the end.


Next, I diced 3 cloves of garlic.  My basil wasn't looking that great (blame it on the hot California weather), so I decided I would add some spinach.  I wasn't sure if the two pair well together, so I Googled and voila! there were plenty of recipes out there using both spinach and basil in the same recipe.


I copied the "ribbon" technique from the original recipe to cut both the basil and spinach leaves.  It was really easy.  Stack your leaves, roll them and then slice.  Do not slice lengthwise, start at the smaller end and keep slicing until it is all cut up.

Next, I warmed about 4 tablespoons of olive oil and sauteed the diced garlic in the oil over medium heat for about 2 minutes.  Then I added the zucchini, salt and pepper.  I put the lid on and continued to cook the zucchini for about 9 minutes, stirring often.


There really is a ton of moisture when cooking zucchini this way and it steams up quite nicely.  Once the zucchini actually started to resemble cooked pasta, I added the basil and spinach and continued to cook for about a minute.  My kitchen smelled heavenly.


Finally, I added the Parmesan cheese.  I used DiGiorno.  It saved me the step of grating my own.  I continued cooking over medium heat for about a minute or so - just until the cheese started to melt.


Since there was still quite a bit of moisture, I used a slotted spoon to plate the pasta.  I then added some additional Parmesan cheese and fresh ground black pepper.  This is the end result. 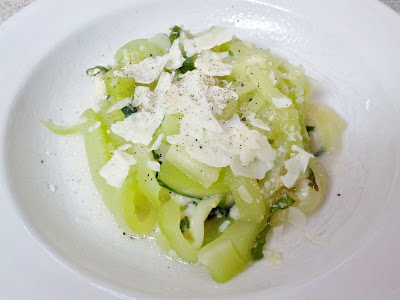 I know it does not look super pretty, but I promise it was so flavorful, even my mom, who really doesn't eat this type of stuff, liked it.

Next time I make this I will leave the peeling on the zucchini, cook in a nonstick pan and use half the amount of olive oil.  My thinking is doing all of these things will help eliminate some of the excess moisture.  I could be wrong.  Either way, this was simple and tasted great.  All in all, it took me about 30 minutes to make.  That includes picking the zucchini and herbs from the garden, all of the prep, cooking and taking pictures.  It made three servings the size you see in the picture above.  I could easily grill some chicken at the same time and really have a great meal even the hubs would love.  Please post a comment if you try this and let me know how yours turns out.  Until next time...
Posted by Unknown at 4:45 PM

Hi, I'm Angela - Welcome to my blog! I created this blog to share my passion for all things tech. I want to use it to help involve, educate and share my knowledge (and let's be honest, sometimes ramblings) with others. If I happen to completely remodel and/or redecorate my house along the way, my husband won't mind. Much.